Reviewing The Top Ten Country Singles From This Date In 1994 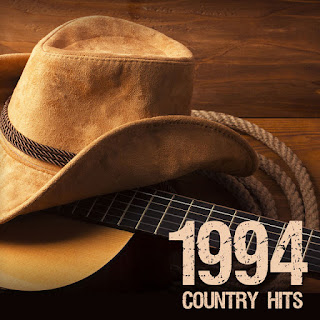 My record reviews somehow seem to zero in on certain years. I actually prefer more variety, but I'm dependent on the charts that are available. Google isn't a "magic answer machine", as my computer-illiterate husband seems to believe.

These lookback posts may seem quirky, but I still love music; just not today's music. When one reaches a certain age, they enjoy revisiting the past; probably for the same reason my dad thought Dean Martin was the shitz and my mom loved Ray Price well past his time.

Plus, our memories are selective. If someone was to spit out 1994 to me, I'd say, well, yes, that was a great year for music. But was it? Revisiting the past informs today. For example, it's an accepted fact that today's country reeks, but does it reek more than yesteryear? That's what I'm here to find out.

Where was I in 1994? Well, I hadn't yet turned forty and I'd just begun to find my niche in the corporate world. I'd barely landed a job at a health insurance company (because someone else dropped out) and had risen in the ranks to a supervisory position, when my obsequious boss called me into his office and presented me with a proposition ~ lead a new, experimental division that consisted of data entry, a mindless pursuit that struck me as a blow to my intelligence. He wanted me to abandon all the knowledge I'd gained and teach people how to fill in little computer boxes? Granted, he and I weren't best friends, but I didn't deserve to be punished this way.

"Can I think about it overnight?" I asked.

"Sure. Come back tomorrow and tell me you accept," he said.

Faced with no choice (I surmised), I came back the next day and accepted. And that supercilious asshole actually opened up a whole new world for me. I learned how to interview prospective employees, how to train them, how to troubleshoot a wobbly system, how to talk back to a vociferous VP a thousand miles away. I learned that I liked this "being in charge" schtick. And I was good at it. My (now) former boss would stop by from time to time just to shoot the breeze. I'd gone from peon to princess in the course of a few short months. In time my unit expanded into a second shift and I had to choose supervisors and assistant supervisors. I was never awarded with the title of "manager", but I was a de facto one. I earned a manager's salary and even landed a corner office.

My oldest son was about to graduate from high school and my youngest was only two years behind. They were self-sufficient enough to allow me to indulge in this new world. I spent hours at work and too many hours at home planning for the next day. And I never once felt stressed.

Music was my primary release and the country world obliged. The bulk of my employees loved country, too, so we could always chat about the latest hits on my walkabouts.

All this would eventually end explosively, but in 1994 I didn't know that.

So, this review has resonance for me and I'm looking forward to finding out if this is my version of dad's Dean Martin or if I've completely hallucinated the year's musical events.

I've repeated this ad nauseum, but if you're a new reader, these are my rules:

To be honest, I've only ever liked two releases by Collin Raye, but one of those was so good I think I elevated this singer in my mind. This track is so formulaic that only the singer saves it. I guess I see now why there is no official video. This is completely forgettable, even though ballads are Raye's strength.

The song has a nice sentiment, but the track has nothing to distinguish it. It's a poor man's Love, Me, which also wasn't too great.

The 2022 me would hear this as a completely new single because I would have zero recollection of it.

#9 ~ Shut Up And Kiss Me ~ Mary Chapin Carpenter

This singer started off with a bang in '89, with original, emotional releases. Her first album was delirious. Even 1991's Down At The Twist And Shout stirred a sense of abandon. Then at some point fame seemed to jade her. This track may have been her swan song, at least at the top of the charts. I get it. It's a craggy mountain to topple from. Only the best can top themselves. Mary CC didn't do it here. It may be that it suffers by comparison to her meatier songs and even her "fun" songs, like Down At The Twist And Shout and The Bug. She still has the discordant piano kicking it off, and her songwriting chops are intact, but the song itself is a feather.

I can't put my finger on why this one doesn't work. My go-to theory is that a song needs a memorable chorus, and this track doesn't even have a chorus, just a repetition of the title. That may account for my shrug. Three decades in the future when I think about Chapin Carpenter songs, this one won't even cross my mind.

I'm trying hard to remember which song put Neal McCoy on country's radar, but in the early 90's he was always there. I'm going to venture that the song was The Shake, but only because he called out my hometown in the lyrics. 1994 me is going to guess that McCoy is but a flash in the pan. He fills a certain niche, a pre-Achy Breaky Heart vibe.

As for the track itself, points for the crunchy Telecaster at the beginning, which will draw couples to the dance floor. I would have done verse-chorus, rather than verse-verse chorus, for better flow; since the narrative itself isn't all that interesting. The back story could have easily been condensed into one verse. Really, what gives this song any energy at all is the chorus ~ emphasize that. I get it; this is a barroom song, and there's nothing wrong with that. Everything in music doesn't have to be super-serious.

#7 ~ I Try To Think About Elvis ~ Patty Loveless

If a singer is going to stray from weighty songs, this is the way to do it. (Lookin' at you, Mary Chapin Carpenter.) Patty Loveless is one of country's unsung royalty, who doesn't get the plaudits she deserves. And while I love (love!) Don't Toss Us Away, I'm also a big fan of her sassier singles, like A Little Bit In Love and Timber, I'm Falling In Love. This single is cheeky and rather goofy. It's nothing but pure enjoyment

Most people don't realize this track is a remake. That's okay. I barely remember the original, but I do remember it ~ recorded by New Grass Revival. On the other hand, I have no recollection of the Oak Ridge Boys having recorded it, even though it was included on an album I bought, Room Service. (I sampled both versions on Spotify and can report that Garth's version is a near-replica of the original and the Oak's version is pale and pallid. No wonder I don't remember it.)

This is one of those songs that just grabs you. If you're driving when it blasts out of your radio speakers, you can't help but stomp your foot down on the accelerator. It's best consumed on a moonlit night on a rural highway.

I would like more Garth Brooks tracks if he recorded better songs. I've got nothing against him as a singer. Sure, he's not the best country singer of all time, but he's certainly not the worst.

This one, though. Genius choice.

While Nashville songwriters are starving, everybody's busy recording remakes. Of course, this song was made famous by the Amazing Rhythm Aces.

Sammy Kershaw just keeps hanging in there, but has never once managed to record a song I like. As a singer, he's a solid C-. Maybe that's why I've never given him a second thought.

This song has that Jamaican rhythm I like, but the original wins, especially since Kershaw's version is a note-by-note replication.

I give the original a B, but Kershaw's version a...

As ambivalent as I am toward Sammy Kershaw, I absolutely detest Tracy Byrd. I can't explain it, but he strikes a repellent chord in me much like Conway Twitty does. Maybe it's his face...or his voice. Or a fusion of both.

And what exactly is a watermelon crawl? I don't know and I don't give a damn.

The song itself? Putrid. Were the songwriters drunk when they penned it? A memorable song needs to be universal. The fact that 99.9% of country fans have no idea what this is even about is the kiss of death.

Ronnie Dunn is a helluva songwriter. This one is essentially a throwaway. Hey, you write a lot of songs, you're gonna have a couple of clinkers.

I see where he's going with it. The long drawn-out "sheees", but the beginning doesn't lead to anything but mush.

This track is simply not one to list on Ronnie's CV. I doubt I'll even remember it in, say, 2022.

This song was, of course, written by Jackie DeShannon (what the world needs now...) That said, it's almost the perfect pop song. Can one blame Pam for recording it?

I can't critique the song itself. That's not why I'm here. But let me say, this is the quintessential sixties pop composition, and I'm partial to those.

Pam Tillis, while not possessing the strongest voice in country, knows how to accentuate her talents. Any girl of a certain age would find herself dancing The Jerk to this.

Alan Jackson has never received the respect he deserves as a songwriter. He gets it. He knows how to write a country song. Short, pithy verse, sock-you-in-your-gut chorus. I think if I was to choose one single co-writer, it would be him. Of course, he'd get all the credit, but I could insert a couple of words somewhere.

If one is looking for the essence of country songwriting, you can stop here.

So, what do I know about October, 1994? Well, a lot of artists, sans Alan Jackson, thought old hits were their ticket. Some succeeded; most faltered. I'm not averse to remembering the past ~ the past was sometimes great ~ but you just can't beat a timeless talent.

Good on you, Alan Jackson.