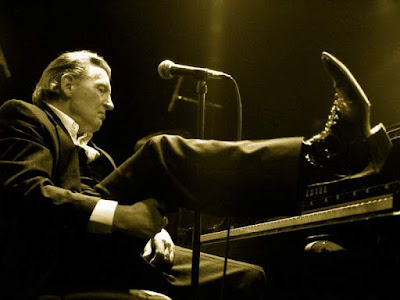 I was a little young to appreciate Jerry Lee Lewis in his rock 'n roll heyday. All I knew about music was that I loved it, it filled me with inexplicable joy, and that one never knew what song would explode from my mom's kitchen radio next. I knew the names of the artists on my sister's 45's (yes, I was a prodigious reader), but they didn't seem to own any records by Jerry Lee Lewis. I don't know why, but I don't think they purchased many new records, instead assembling their odd collection from neighborhood rummage sales. Our family wasn't exactly flush with cash.

In my pre-kindergarten years the artists I heard most on Mom's radio were The Everly Brothers, Johnny Preston, Bobby Rydell, and Connie Francis. Oh, and Elvis. Not exactly cutting edge. But while my sisters' tastes in music were relatively staid, their one-year-younger brother was much more eager to listen to something wild. It must have been my brother who introduced me to The Killer. He owned the album, "The Golden Hits Of Jerry Lee Lewis that included such fiery tracks as Whole Lotta Shakin', Great Balls Of Fire, Breathless, and High School Confidential. All I'd known to date about piano music was Floyd Cramer. This wasn't that. This was something completely new and exciting. 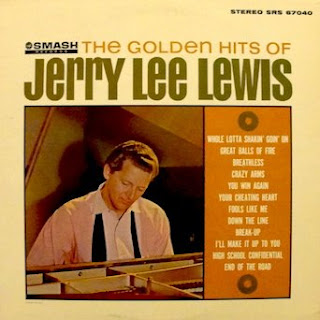 Eventually I caught Jerry Lee on a few TV shows, like Shindig and Lloyd Thaxton. I'd never in my nine years of life seen anything like him. In 1964 my preference was the British Invasion ~ The Beatles, The Dave Clark Five, Manfred Mann; but I loved seeing American artists, too ~ Roy Orbison, The Righteous Brothers...and Jerry Lee Lewis.

(Not the best video, but better than the lip-synced one)

(my favorite)
I'm a big proponent of "joy" in music. Listeners find musical joy in various ways ~ maybe a symphony makes them cry, maybe ambient music puts them in a Zen state. Perhaps a dramatic film score makes their muscles pulse. For me "joy" comes down to a thumping rhythm. I don't care if it's a country rhythm or a rock rhythm, but a feel-good song, for me, requires one. Who was the king of rhythm? I say it was the guy who knew how to pound it out on a keyboard.
But it wasn't simply that. Artists (especially now) are timid. Granted, some may just be naturally laid back, a la Alan Jackson, but too many play it safe. Jerry Lee wasn't Elvis shaking his hips or his leg in some rehearsed pseudo-choreography. JL was natural. He drank in the audience's excitement and responded with pure abandon. Yes, he kicked over his piano stool and one time allegedly set his piano on fire ~ all the better for the show. Shoot, if you paid your hard-earned money to see an artist, even if it was a dollar in 1957, you wanted to see a show. You didn't want to mumble to your date, "Okay, here comes the part where he..." You wanted to be surprised, knocked over. You wanted joy.
It seemed like just as soon as I got to know Jerry Lee Lewis, he was gone. I was a kid. I read gossip magazines like all good pre-teens do, but I don't remember reading anything about what happened to him. So I moved on, like a mercenary. I'd never purchased any Jerry Lee Lewis singles anyway ~ I saved up my weekly allowance to buy the latest Beatles 45.
Then around 1967 I became willingly indoctrinated into country music. Here I was, busily playing catch-up, figuring out which country artists were worth my time and which were corny relics. I tuned in to every country TV show available, which pitifully consisted of Hee Haw and a few syndicated programs like That Good Ole Nashville Music, and the Bill Anderson and Porter Wagoner shows. I think it was on Hee Haw where I first caught this:

"Oh, there he is! Jerry Lee Lewis!" I might have said inside my head. "He looks different, but wow! Listen!"

Let me say this about Another Place, Another Time ~ Yes, it is a superb country song. However, in different hands, it would most likely score a top ten single, but would eventually be lost to time. Performed by Jerry Lee, however? With that combustible combination of regret and bravado? Just the flick of his hand on the piano keys tells you he might be down, but he sure as hell isn't out.

Some will argue that Jerry Lee was always a country artist at heart. I don't dispute that, but it sure took him long enough to fully embrace it. And yes, country was his way of coming back from scandal, but one thing country fans do is embrace the music. Hell, ninety per cent of country songs are about imperfection; you know, the actual human condition. And yea, you bet your life we embraced him.

He followed that hit up with this:

Note that he doesn't cast out the Jerry Lee of old, simply modifies it. He still has that rebellious spark in his eye.

In 1970 he released this, kind of a nod to his past style with his head planted firmly in the present:

And don't forget this:
Once I (and I alone) got Bobby Bare inducted into the Country Music Hall Of Fame, my new passion became seeing Jerry Lee finally (finally!) get his due. Not to praise the Rock And Roll Hall Of Fame, but at least they had the good sense to induct him way back in 1986, along with Chuck Berry and Fats Domino. My fear was that the gatekeepers at the Country Hall Of Fame would deny him his due until it was too late, just as they had with Faron Young. But at last, this year, at Jerry's ripe young age of 87, the powers-that-be finally relented. Those anonymous birds at the HOF are enigmatic figures, but perhaps peer pressure at long last shamed them. And Jerry Lee got to witness the announcement while he was still on Earth.

There are few, very few, artists who can legitimately be called "original". In country, I might bestow that moniker on two, maybe three. In rock, I can count them on one hand.

Jerry Lee Lewis was one of a kind. There never will, never could be, anyone like him.