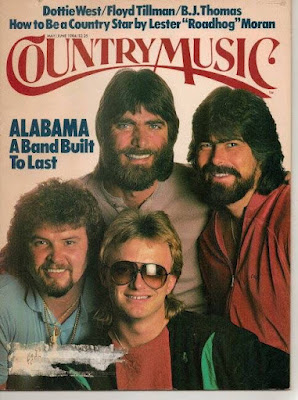 It was once a running joke in my household. "Oh, Alabama is coming to town!"

My hometown was small, about 40,000 souls, and while we had a brand new civic center, it took a few years for major country acts to catch wind of it. But Alabama found it right away. In fact, the first country concert I attended in that new building was by those four guys. It was around 1980, and they had no opening act that I can recall. I wasn't a big fan or really even a medium fan, but I craved the concert experience. We sat in the upper tier of seats and thus the band was but a speck.

The band wasn't my style. They played a lot of Southern Country Rock, arguably my least favorite sub-genre. But at least they showed up. In fact, if there was ever a harder touring country band than Alabama, I can't name it.
And they continued to show up, year after year. Thus the running joke. And I went a few more times, during which their music got better.

I never bought an Alabama album, but I bought the two singles above. It seemed they'd drifted further from their Lynyrd Skynyrd selves and toward a more commercial sound. Which to my ears was a definite plus.
And boy, once Alabama took off, it took off. The band won Entertainer Of The Year at the CMA's three years in a row, not to mention the roughly 200 other major awards bestowed upon them. It's difficult to recall a time when Alabama didn't exist.
In all four of the above videos, it's not actually Randy Owen who stands out, but Jeff Cook ~ Cook sawing the fiddle, Cook playing the double neck guitar. Jeff Cook singing harmony.
Maybe it was due to the years slipping by (both theirs and mine), but my favorite Alabama tracks are those the band released in the 90's.

The band, such as they are (sans the ailing Jeff Cook and the long-ago discarded Mark Herndon) appeared recently at an outdoor venue this summer not far from where I live. Did I go? No. Did I consider going? No. "Alabama is coming to town!" belongs to a time that no longer exists.
Nevertheless, everybody knows there would be no forty-year Alabama legacy if there hadn't been a Jeff Cook.
Rest in peace.