I couldn't tell you how many times I've been to Lake Superior. But it's a LOT.

I started going there with my mom and dad and my little sister and, at times, various nephews, and later, with my own kids.

It sort of got to be a joke with my kids. "Oh, we're going to Duluth again. Yay."

I remember 1978, my dad driving the Lincoln (ANOTHER big boat, if there ever was one). I think there were way too many people along on that trip than would normally fit in one car, even a Lincoln. There was my mom, of course, and there was me, and my then-husband, and my soon-to-be two-year-old, Chris, and my nephew, Tim. And my sister, Lissa. We got bored on the long drive (and it WAS a long drive from Bismarck, North Dakota - over 600 miles). So, Lissa and I started to sing along with the radio, lounge-lizard style, singing "After The Lovin'", by Engelbert Humperdinck, and "Midnight Blue", by Melissa Manchester.

We could always crack each other up, because we had the same sense of humor. My mom was asleep in the back, and everyone else was just gazing out the window or something. My dad was driving, and here's the two of us, in the front seat, acting like idiots, and my dad is doing his best to ignore us. Ahh, good times.

But anyway, we finally got to Duluth, and all I wanted to do was sit on a bench on the waterfront, and just BE. I could have sat there for hours, but they all got hungry, so we had to go eat at a place I think was called "The Lemon Drop" or "The Lemon Tree" or something like that. The place had great fresh-caught walleye, so we always ate there every time we landed in Duluth.

I have a picture of my dad and my nephew, Tim, and my son, Chris, gathered around a water fountain on our way to Duluth, and my dad was getting such a kick out of Chris trying to get a drink. I love that picture.

So, henceforth, we made a lot of trips to Duluth.

Basically, the places we went for vacation were either The Black Hills of South Dakota or Duluth, Minnesota, with a meandering to Yellowstone National Park one year.

I have lots of pictures of Duluth, Minnesota. Probably too many. But I just never could get that lake out of my psyche. About 50% of my pictures are of Duluth.

We'd always go to the maritime museum when we were there. They had lots of old pictures. And every dang time I went to Duluth, I got this song stuck in my mind:

In recent years, we've vacationed on Lake Superior many, many times. Not at Duluth, mind you, but still on the Big Lake. Somehow, it just keeps drawing me back. There's something about That Lake.

We were going to drive up to see the Tall Sailing Ships. That's something I've never seen before. Alas, plans changed.

But just between you and me, sailing ships be damned. All I want is just want to be on that waterfront again. 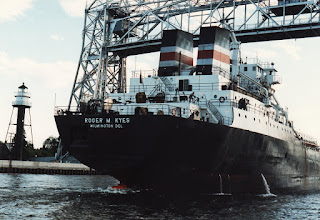 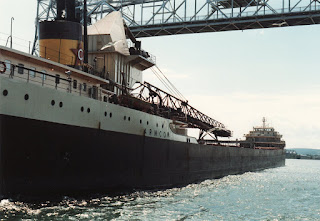 ANOTHER FREIGHTER ON DULUTH HARBOR 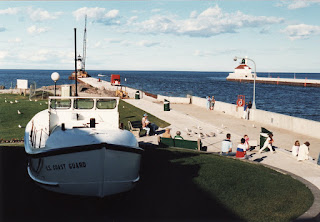 THE HARBOR AT DULUTH 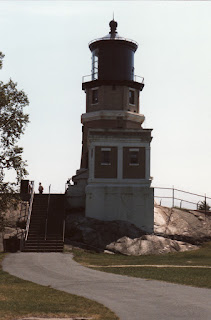