Ahhh, the eighties are a'rollin' now! We got past that first hurdle - 1980 - so now it's onwards and upwards!

Think back to 1981, if you can. I couldn't. So I looked it up. There were, of course, some major events that year (as in every year - duh). And most of those events seemed to revolve around President Ronald Reagan. "Well", he started out his year just dandy.....by being shot. Not a good way to start your year. Later, he fired the striking air traffic controllers, and he named the first woman to the Supreme Court (which, in hindsight, wasn't a real great choice).

In pop culture, Blondie and Hall & Oates and Dolly Parton, along with Sheena Easton, all had big hit records.

Clint Eastwood was starring with a chimp in the sequel, "Any Which Way You Can". And Burt Reynolds was camping it up in "Cannonball Run".

CBS was leading the TV hit parade, with shows such as "M*A*S*H", "Dallas", "The Jeffersons", and, of course:

Strangely, the CMA voters liked the 1980 SONG OF THE YEAR so much, they decided to award it twice!

Yes, that's right. "He Stopped Loving Her Today" was again named song of the year. Writers Bobby Braddock and Curly Putman couldn't have been more pleased. Not to mention the repeat MALE VOCALIST OF THE YEAR winner, George Jones.

And here's the man himself, performing on, surprise! The 1981 CMA Awards telecast. (He knew the song pretty well by now.)

Our FEMALE VOCALIST OF THE YEAR was, well waddaya know - Barbara Mandrell! Sort of a letdown after the previous year's entertainer win, but still! And she won the award by recording crappy songs such as:

Almost as bad as "Sleepin' Single In A Double Bed", but not quite.

The HORIZON AWARD winner in 1981 was Terri Gibbs. Yes, she only had one hit song, but these horizon awards are tricky to predict. Who knew? Wonder whatever happened to Terri. Well, wonder no more. Here's Terri's official website: Terri Gibbs

I always kinda liked Terri. She seemed quite geniune. Here's the only performance I could find on YouTube of Terri doing her big hit number, "Somebody's Knockin'":

Chet Atkins again won INSTRUMENTALIST OF THE YEAR. No offense to Chet, but, you know, there were other musicians in Nashville around this time.

The ALBUM OF THE YEAR couldn't have gone to a nicer or more deserving fellow. This album went platinum, and rightly so. "I Believe In You" by Don Williams.

The VOCAL DUO OF THE YEAR had one of my favorite country songs. Strangely, there are no videos to be found of the two performing this song. Probably some legal mumbo jumbo or something.

But I did find some embeddable audio of DAVID FRIZZELL and SHELLY WEST performing, "You're The Reason God Made Oklahoma":

Both of these artists have a pedigree, per se. David is the brother of legend Lefty Frizzell, and Shelly is Dottie West's daughter.

Interestingly, this song was featured in a 1981 movie, which I just happened to reference at the beginning of this post; Clint Eastwood's "Any Which Way You Can". That might have helped them win the award; I don't know. But I still really like this song. 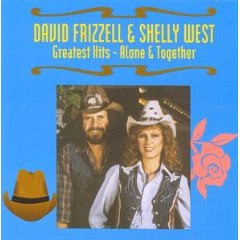 The SINGLE OF THE YEAR was kind of a "fun" song, starring the Oak Ridge Boys. Well, technically starring Joe Bonsall, Richard Sterban, and William Lee Golden's boots. Here's another performance from the 1981 CMA Awards telecast (which is always nice, since I'm talking about 1981) of "Elvira".

This is but a simple song, that continues to rise to a higher key as it goes along. Which makes it much easier for R. Sterban to hit those "low" notes. And is it just me, or is Richard kind of drunk with power on this number? Every time he does his "oom papa oom papa mou mou", the audience squeals. Heady stuff, no doubt. You gotta feel kinda bad for Duane Allen, though. He doesn't have any room to shine on this number. Even William Lee's boots get more attention than poor Duane.

Say what you will about the Oak Ridge Boys. They were superstars way back when, and I certainly enjoyed seeing them in concert. And, if you want to catch up with the "boys", just click here

I don't exactly know how they won the instrumental group award, unless it was for Jeff Cook's mean fiddle, but nevertheless, they won. And mark my words, they would continue to win awards for years to come.

Who am I talking about? Why, Alabama, of course.

Just a bit of background that matters to no one but me......In my small town, way back when, the concerts were few and far between. So, one went to basically any concert that was available. And Alabama was certainly a touring band! I saw them many, many........many times. Sometimes I couldn't really "see" them, because I was sitting high up in the nosebleed section. But I could still spot Randy's beard a mile away! I sort of became jaded. "Oh, here we go; Alabama........again." But that's kind of cruel and undeserved. If it hadn't been for Alabama, I'd have been sitting home on a Friday night, watching Johnny Carson doing his Floyd R. Turbow skit for the thousandth time. Not that I don't love Johnny, but one really needed to get out of the house once in awhile.

So, here we are, at the end of the awards ceremony......except for, hello! ENTERTAINER OF THE YEAR.

No doubt, it was time to head into the kitchen to serve myself up some crackers and cheese, because he we go! Another LONG acceptance speech.

While Barbara was thrilled, thrilled to pieces, to win the entertainer of the year award in 1980, she was shocked - SHOCKED, mind you, to win it again in 1981! And there were SO many people to thank. Especially the little people. No, not the little people from the Wizard of Oz. Silly. The little people like YOU. The FANS. Without whom none of this would have been possible. And GOD. So, in essence, the little people and God.

I know that I come off as not liking Barbara Mandrell, but that's not true. What I didn't like were her insincere acceptance speeches. If she'd just performed, and NOT TALKED, I would have been happy as a clam!

Here's a performance of Barbara's from around that time.

And before we take a gander at it, let me just say that, no, she wasn't country when country wasn't cool. Barbara, in fact, can shoulder a lot of the blame for steering country in the direction that it's gone.

She was the "pre-Reba". Both of them started out as "country" singers. Then their ambition led them to places where no self-respecting country fan wanted them to go.

And now we've got this mess to clean up.

And, ironically, Barbara now sounds "country", compared to the ones who've followed in her footsteps. See, give 'em an inch........

Here's what country used to sound like, way back when:

Vernon Dalhart was an early pioneer of country music. With songs such as, "The Prisoner's Song" and "Wreck of the Old '97", he scored some of country music's first million-selling records.

It's important that we not forget from whence we came. Yea, he was country when country wasn't cool.

Here are the Statler Brothers, performing "Wreck of the Old '97":

Grant Turner was the voice of the Grand Ol' Opry for 47 years. 47 years! Yowza! He was the only disc jockey to be inducted into the hall of fame until the year 2007, when my friend and yours, Ralph Emery, got his just due. Not too shabby, Grant Turner!

So, the nice thing about the year 1981 was that we saw some new faces emerge. No doubt, as the eighties wind around, we'll see many of these same folks again. But it's always nice to recognize some new talent.

Not a changing of the guard, per se, but a new day dawning on the landscape that is the CMA awards.
at November 16, 2008