Yea, Yea, The Summer of Love 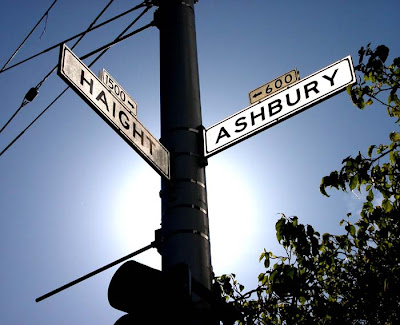 I wonder who named 1967 "The Summer of Love". Obviously not a marketing person. Because if you're going to declare something the "Summer of....", you want to have that commercial tie-in.

For example, how about "The Summer of Kraft Macaroni & Cheese"?

You could give away wedge-shaped key chains; bumper stickers featuring globs of macaroni clinging together on a fork. You know. Marketing-type stuff.

From what I can tell, the Summer of Love really had no commercial potential, except for Bill Graham of the Fillmore West, who could tout his acts, the Jefferson Airplane and well, I guess that's just about it, on handbills, of which nobody could read, because all the kids were too stoned, and were just wandering aimlessly on the streets of San Fran, and playbills weren't really anything they could hawk to buy more drugs, so what good were they?

I sometimes wonder what happened to those kids from 1967? I guess they'd be retiring about now, but oh, the stories they can tell their grandchildren. Oh wait, maybe not.

"What did you do when you were a kid, Grandpa?"

"Oh, Thad, that's not important now. What's really important is that we get out there and vote for Obama! Wanna toke?"

If you watch newsreels from 1967, you would get the impression that everything was groovy, and kind of wavy, but the hit songs from that year don't necessarily reflect that.

But, you know, memory is selective.

1967, actually, was a pretty good year for rock music. Not to disappoint the old hippies, but most of it was pure pop.

While the kids on Haight Ashbury were zoning out, chillin' to seven and a half minute psych-o-delic jams, the rest of the population was buying 45-rpm records of songs such as this (yes, this was the number one hit of 1967):

(Kudos, Neil Diamond. Jan Wenner can ignore you all he wants, but this was the perfect pop song.)

I'm just going to go down the line here, and recount the top hits from that seminal year, in order, so let's see who wins ~ the hippie kids or possibly not.

(Isn't Alex Chilton the epitome of every sixteen-year-old from time immemorial? Get that hair out of your eyes! And stop sulking, Alex! Stop being so moody! Ahh, the joys of raising a teenaged male. At least Alex was bringing home some moolah for the family, so they tended to overlook the bad posture and pouty look.)

(I know that this song is "mysterious"; or, in my opinion, "missing something". I used to sit in the back seat of the Ford Galaxy and hear this song blaring over the AM radio, and wonder, what the hell? But the main point I want to make about Bobbie Gentry is that she wore her hair in that long, dark "fall". Mesmerizing.)

(Let me just say how much I hated, and still hate, this song. I'll grant you, the Association had one good song ~ Never My Love ~ but this? It just grates on my nerves. No wonder kids took drugs. If I was on a desert island, and this was the only song I had to listen to, I would prefer to just drown myself and get it over with.)

(Ahhh, Felix. This song will still be played in the year 2112, and kids will say, yes! This song is cool! Really, was it from two centuries ago? I guess those neanderthals invented fire, after all.)

And speaking of fire, okay, I skipped the line a couple of songs, but well, c'mon:

(THIS was the song that I will always remember 1967 for. I was but twelve years old, and I don't know what it was about this song, and about Jim Morrison, but this was IT.)

Believe it or not, and the charts don't lie, THIS song superseded Light My Fire, by, in fact, a couple of spaces. So, though Grandpa Hipster may want entertain selective memory (or is it just dementia?), here ya go, Grandpa. Explain THIS to the grandkids:

Oh, look! The Monkees are back! Yes, the Monkees. Sure, pretend they weren't the biggest thing that happened in 1967. Pretend all you want. I was there. I remember.

I have nothing against Ferris Bueller (or John Hughes, for that matter), but you know, you didn't invent that song.

I happened to be there when it was happening.

Yes, they charted in 1967, too. Not with their choicest song, mind you. But, yes, they were still around.

The interesting thing (to me) about this song, by the Buckinghams, is that I have no idea what the backing singers are singing. But it's catchy, whatever it is.

You'd never know it, but this song was number thirteen in the year 1967. Yes, thirteen. Not that there's anything wrong with thirteen, but if you were to listen to the revisionists, you'd think this was the number one song of all time. It wasn't.

Okay, this video is horrendous, but it's the only one I could find of the Strawberry Alarm Clock performing this song.

And I'm officially nominating the Strawberry Alarm Clock for the worst band name ever.

I wonder whatever happened to the SAC. And who was in the band? And did any of them go on to bigger and better things? I wish I cared enough to look that up, but it's late, and all I know is, I heard this song a lot on my transistor radio as I was riding the stupid school bus, and listening to all the geeky boys talk about Star Trek, and I was bored out of my mind, and this song didn't help things, believe me. I do sort of remember 1967 as the year of perpetual boredom. But maybe that was just me.

And who could forget the Rolling Stones? Nobody. Because they're still out there, touring. Even at their age. Those kids from the year 2167 will be saying, "The Stones are still touring? Who do they think they are? Cher? Or Elton John?"

Nevertheless, you can't deny that this song, the number fifteen hit of 1967, is a great one.

But it's not due to some headband-wearing, greasy-haired, Nehru-jacketed seventeen-year-old who was tripping out on the California coast.

No, it was solely due to some awesome talent, and to some record producers who knew how to create mega-hits (Frank and Nancy notwithstanding).

I got through number fifteen, but I really only scratched the surface.

This calls for another blog post! Let's keep keepin' on with hits from the summer of love!

But I still say, let's rename it something that we, as consumers, can get behind. I'm thinking the Summer of Trix Cereal.