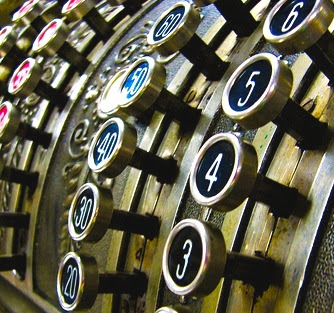 When my youngest son was 6 months old, I knew the jig was up, and that I would have to go back to work.

It had been a nice sabbatical, if you call toddler/infant duty a sabbatical, but I enjoyed it.  I would have been happy to stay home awhile longer.  Alas, the checkbook spoke to me and told me otherwise, so off to find a job I scurried.

There was one of those signs along the street in front of our complex, advertising, "Future Site of LaBelle's".  And as we drove past it, I announced, "That's where I'm going to work.".  The pluses were that it was approximately 3 blocks from my home, and well, that's about it.  But I decided that I was going to get a job there.

Did you ever apply for a job for which you had no qualifications whatsoever, but you took what little experience you did have and twisted it into something that looked faintly like what the job required?  Well, who hasn't?  I had run a cash register at my mom and dad's business, so there you go.  Cash register experience.  Voila.

I don't know if anybody even remembers LaBelle's Catalog Showroom.  It apparently became defunct sometime in the mid-1980's.  But for awhile there, it was the thing.  It was a forerunner, I guess, of those warehouse stores, but on a much more pitiful scale.

There would be one of each object displayed on the shelves, and people would take one of those little stubby pencils and an order form and write down the item number, hand it to somebody, and the warehouse guys (who were just standing around with nothing much to do) would get right on it.

I worked in the "Will Call" department, which apparently meant that I would "call" people when their order came meandering up on the conveyer belt.  Another qualification I had for the job, now that I think about it, was a good speaking voice.  Because once the item finally trudged through those leather hanging strips, out to the front of the store, I would grab the little microphone off its wall mounting and announce, "Gary Pompandreaus, your order is ready at register three.  Gary Pompandreaus, register three please."

(Now that I think about it, I'm not so sure that everybody loved having everybody else in the store know that they were there, so that they'd all come running up to the cash register, clamoring, "What'd you get?", but that's how LaBelle's rolled.)

And the whole "register three" bit was sort of unnecessary.  There were generally two of us working the registers, and therefore, it didn't exactly matter which register somebody strolled up to.  We'd ring 'em up, regardless.  I wasn't going to be an ass and say to them, "No, I said register three!", and make them move one slot over.  Although, in hindsight, it would have been fun to grab that mic again and scold people publicly for their malfeasance.

I liked the job.  Sure, it got crazy at Christmas time, but that actually was much more interesting than standing around on a Wednesday night, ringing up a purchase every 20 minutes or so.  That could get boring and uncomfortable, seeing as how we had to wear high heels.  So more customers meant less time thinking about how much our feet hurt.

I even liked working the "returns" register.  Of course, times were different then.  Everybody (mostly) was polite, and we had a generous return policy.  It made me feel good to make customers happy, by just handing them their money back.  It's not like that now, is it?  They want you to bring three forms of ID, the original receipt, and heaven forbid if you've (gasp!) opened the package!  And then they begrudgingly hand you a slip of paper as "store credit".  But customer service is not exactly geared toward the "customer" anymore, is it?  They shouldn't even label the counter "Customer Service".  They should call it the, "What the hell do you want?  You're bothering me!" counter.

At the time I worked at LaBelle's, the cabbage patch doll craze was in full swing.  People were nuts about those dolls.  I sort of felt out of the loop, being a mother of boys.  And sadly, had I wanted one of those grotesque, large-headed babies, I could have had my pick.  I could have perused the shelves, picked out whichever cabbage baby was the least ugly, and had it set aside for me.  Too bad I wasn't working at LaBelle's when Transformers were popular.  I would have saved TONS of money.

Sadly, for me, retail didn't pay worth crap.  So, I didn't stay at LaBelle's long.  And apparently, LaBelle's didn't stay at LaBelle's long, either.  They folded up just a few years after I had moved on.  Their marketing concept was quaint, but they couldn't compete with the WalMarts, et al.  And really, when you think about it, would you like to stand around waiting for your item to come trudging up a conveyer belt, when you could much more quickly grab your crock pot from a WalMart shelf, and stand in line for 20 minutes, waiting to pay for it?

I don't even know if LaBelle's was a national chain.  I'm thinking it probably wasn't.  But for those of you who remember the store, here is one of their Christmas commercials (and really, cameras were dang expensive then!  I had me one of those SLR's, albeit a Minolta; not a Canon ~ purchased at LaBelle's with my employee discount ~ and I have lost all memory of the usurious amount I paid for that thing!  Now, we have digital crappy cameras, that you have to hold two feet from your face in order to focus on whatever object you're trying to snap, and you have little control, and generally, one lens, and you have to pull out your "memory card" and take it to a store and pick out your pics and have them print out, and most of them are throwaways, but dang!  Aren't those cameras cheap now!)

But 1979 wasn't just about getting back out into the working world.  There was also (country) music.

I have mostly foggy memories of many times of my life, but the music brings it all back.  That's what I love about music.

I will say, though, that nobody thought that 1979 country music was worth preserving on video, apparently, because most of it is just not there to share.  Maybe 1979 was a throwaway year?   I didn't think so.

But here is some of what I could find:


Charlie Daniels Band ~ The Devil Went Down To Georgia

Emmylou Harris ~ Blue Kentucky Girl (shhh, yes, you and I know that this was a Loretta Lynn song)

Oak Ridge Boys ~ Come On In

(Hank, Jr. was always great at referring to himself in the third person ~ "Ol' Hank".  He couldn't quite pull it off like Jerry Lee did, though.  I once got up and walked out of a Hank Williams, Jr. concert.  Seriously, the only time I ever walked out of a concert.  In hindsight, if I had it to do over again, I wouldn't have walked out, but I would have stayed and been really bored.)


The Statler Brothers ~ How To Be a Country Star

Just give me some Jerry Lee Lewis any day (and he can call himself "Ol' Jerry Lee" as much as he wants, Hank.) ~ Rockin' My Life Away

Texas (When I Die) ~ Tanya Tucker

These videos, such as they are, remind me of how seminal 1979 really was in country music.  And those are just the videos I could find.  I couldn't find Eddie Rabbitt, nor Kenny Rogers, nor Anne Murray, among others.

I never before really put two and two together ~ my re-entry into the working life and my immersion in country radio.  But, you know, I had more important things on my mind then.

And not buying cabbage patch dolls.