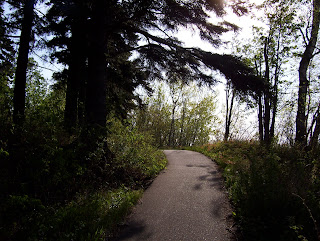 I woke up on my fifty-seventh birthday to the sunrise over Lake Superior.

We were spending our free weekend at Bluefin Bay.   Free, because I was the-e-e grand prize winner of the "Tell Us Your Bluefin Bay Story" video contest.  Here is what got us our fabulous weekend at a lakeside condo:

It was 5:30 a.m., so Josie and I tiptoed out to the kitchen, and I put on a pot of coffee and gave J her breakfast.

Then we settled in on the patio, me with a hot mug, and I whispered to Josie, "Happy Birthday!"  She perked up and became all squirmy, because she was remembering her birthday on the eleventh of May, during which we said, "Happy Birthday!" a lot, so she knew that meant something good.

This was our view from the patio: 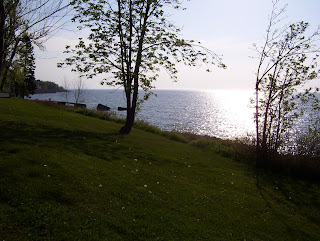 We'd been to Bluefin Bay many times, but I had never before seen so many monarch butterflies.  In fact, I don't remember seeing any.  This time, they were everywhere, and there were couples; or at least it seemed like couples, because they were zipping along in twos.  I wonder if seeing butterflies on your birthday is a good omen.

When my husband got up, we decided to take Josie to Temperance River State Park, which was about 4 miles down the road.  We were the only ones there....heaven.  We managed to hoist ourselves (and Josie) up along several trails and what seemed like miles of stone steps, until we got to the iron bridge that crossed the Temperance River.  From there, we gazed down upon the waterfalls.  And that's when I realized, heights are not my friends.  It was time to go.

My camera battery chose just that moment in time to die, but I did find a pine cone, so I kept it. 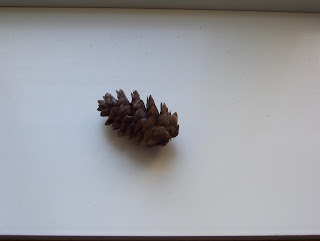 Funny how I always take pictures to remember the good times, but that pine cone will always remind me of hiking with my husband and Josie at Temperance River.

Once back from the park, my husband settled in to do some reading (napping), and since I wasn't in the mood to sleep, I played awhile with rearranging the word blocks on the fireplace mantle.  Yes, I have yet to grow up completely, apparently. 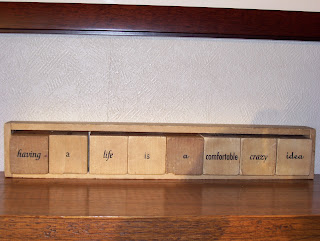 Then it was time to drive to Grand Marais for lunch and "birthday shopping".  The temperature gauge in the car read fifty-seven degrees.  I would have snapped a picture of that, but as I said.....

The only clear radio station we could get was the North Shore public radio station, which we like anyway (90.7 on the dial), because it plays all manner of weird music that we've mostly never heard before.  But, on the way to Grand Marais, the first song we heard was Hank Williams and Long Gone Lonesome Blues.  For some reason, that made me happy.  I do not know why.

Highway 61 (revisited) is a nice scenic route, but, frankly, if you've traveled it eight zillion times, and you just want to get somewhere, it can be a bit annoying at times.  There are several "slowdowns" along one's way, little so-called "towns" that are not much more than a souvenir shop and an outbuilding of some sort; or pull-offs to roadside state parks.  We were getting a little annoyed by "Valerie", who we were following, because she over-compensated for the posted speed limits.  If the sign said, 40 mph, Valerie would slow to 25.  I wouldn't have known it was Valerie, of course, had her license plate not told me.  Soon enough, however, Valerie slowed down and pulled off onto one of the state park resting areas.  I said to my husband, "Valerie is a bit too adherent to the rules, isn't she?  Oh, never mind; she's from Ontario, and then I chuckled.  North Dakota people like me are just like that ~ real stringent rule-followers.

As for shopping, well, I am a horrible shopper.  I'm one of those people whose gaze is captured by shiny objects.  I do not comparison shop.  Hence, to go with my theme of little tiny things (like little tiny pine cones), I picked out: 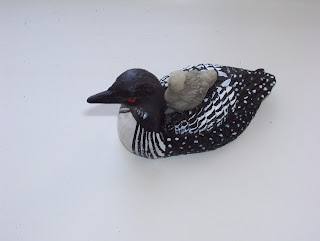 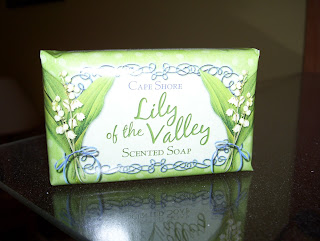 Little tiny Lily of the Valley "cafe soap"!  (the birth flower of May)

Once back from lunch, my husband needed to do more "reading", so I took out my digital camera (that one still worked!) and walked around and just snapped random pictures, most of which I knew would not turn out, but I did it simply for fun. 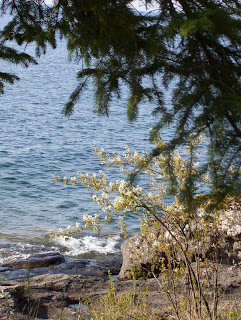 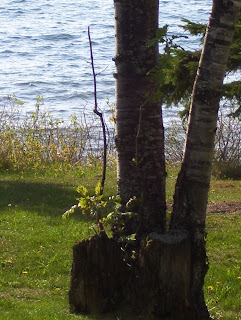 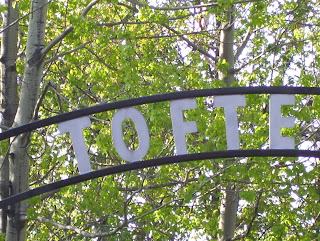 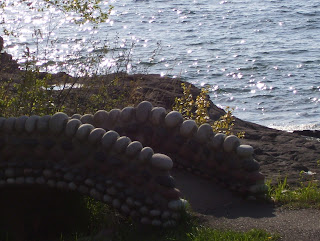 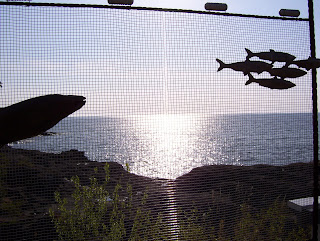 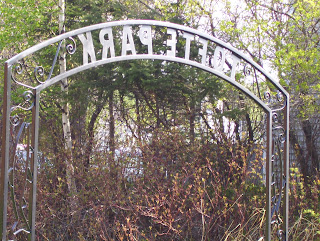 Later that night, we pulled out the sofa bed in the living room, and my husband started a fire in the fireplace.  We opened the windows on the lake, watched a movie with Josie curled up with us on the blankets, had some snacks. 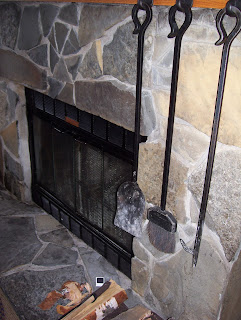 It was a lovely birthday.  The loveliest birthday I can remember having.  Butterflies, tiny gifts, my husband, snuggling, Josie, Hank Williams on the radio, pine cones, and the waves.

And I'm writing this, two days after, because I don't want to forget it.

what a great bday. i love your song that goes with your montage of pics. you seem very peaceful, thats why i had to gather josie is a dog.

Thank you, Mags! It was a great birthday, and a lovely day...and yup, Josie is my pup!