What I Did On My Birthday Vacation 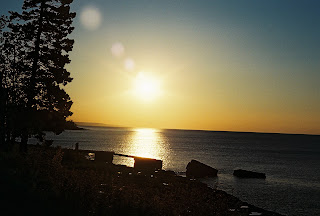 
As you know, if you've been reading my ramblings, I celebrated my fifty-seventh birthday on the shores of Lake Superior in northern Minnesota.

It's funny, the places that draw you in.  We all have a kinship for certain places.  We can't define it, but we know it when we feel it.

The first time I experienced Lake Superior, I was traveling with my parents, my sister, my nephew, and most of all, my two-year-old son and the son who nobody but me knew was on the way.

My parents had visited Superior's shores before, and they kept telling me how nice it was.  A "lake", to me, was like Maple Lake in northwestern Minnesota; a place we'd sometimes go on Sunday afternoons, where my friend and I would swim and visit the concession stand, and my mom and dad would sit at a picnic table in the shade, and eat, and try to keep a handle on the whereabouts of my toddler brother and sister.

This lake was not like that.  This lake was VAST.  It was an ocean of a lake.  As my dad maneuvered the big old Ford down the steep hill leading into Duluth, I caught my first glimpse.  The aerial bridge.  The ships in the harbor.  And I smelled the air.  That was different, too.

My dad turned the car to the right, down Canal Park Drive.  We pulled into a parking lot, and the first jolt to my senses was the wave of hungry seagulls, there in the maritime park; diving and chattering, and walking right up to people, fearlessly, demanding to be fed.

There was a big old iron anchor secured to the ground, there, on the lakeshore.  To the right was the maritime museum and observatory.  We all made our way over to the museum, ostensibly to use the restrooms (it had been a long drive), but then we walked along through the museum, up the sloping pathways, past all the old pictures and the iron ore freighter exhibits.  And every single time, since that first time, that I stepped inside that museum, Gordon Lightfoot nestled inside my brain, and for the rest of the trip, everywhere I went, I heard, Wreck of the Edmund Fitzgerald.

To this day, that song gives me chills.

My first sight of an iron ore freighter skimming slowly along into the harbor, hearing the aerial lift bridge sound its horn to let pedestrians know that it was time to skedaddle.  The ship, too, sounding its horn, three times, and the lift operator responding in kind, was utterly mesmerizing. The long ringing bell, as the bridge slowly lifted to full height, to allow the ship to pass under. 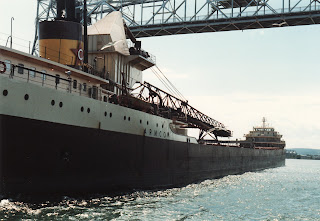 There was a meandering walkway beside the lake, filled with tourists scurrying up to the breaker wall with their cameras when the ships passed through; otherwise only semi-populated with walkers and roller bladers.  A nice concrete bench called to me.  I sat with pen and paper, there in the sun, and just breathed. 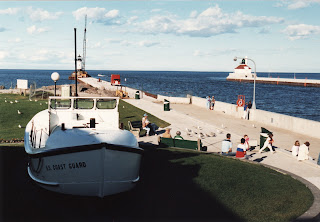 To visit Duluth, then, was to visit the harbor.  The harbor was Duluth's calling card.  Things have changed a lot in those intervening years.  New tourist attractions are now clustered about the harbor.  I liked how it was back then.  Duluth is not a "theme park".  It's a real live miracle of nature.  The restaurant that used to be nestled there on the harbor, where my dad always ordered frog legs, because he thought it was cool (and he always made the same tired joke ~ "They taste like chicken!") has now been replaced with some type of cold concrete auditorium.  One can't even enjoy the entirety of the lake walk, without detouring around concrete barriers.

We would take a cruise around the harbor on one of those Vista Lake boats.  It was exhilarating.  Always cold out on the water, even in the middle of July.  One could prop oneself on a bench there on the side of the boat, and gaze out upon the lake and not have to think at all.  My mom always got my dad to take her inside, to buy a cup of coffee, but I would stay glued to my perch .

Sometimes we would stray from Canal Park; drive up to London Road, where there was a nice family restaurant, called the Lemon Drop.  One could get the absolute best walleye there.  My parents loved it, and so did I.  Alas, the Lemon Drop is no more, so I don't even venture down London Road anymore.

The North Shore Drive, also known as Highway 61 (revisited ~ yes, this is the Highway 61 that Dylan wrote about), is the scenic route up along the shore of Lake Superior, all the way to the Canadian border.  Along 61 is the Split Rock Lighthouse, and Gooseberry Falls.  And who can forget Betty's Pies?

When we visit the North Shore now, we travel another 80 miles past Duluth, but we always stop on the outskirts, at a little roadside park; get out of the car and stumble down the hill to visit the lakeshore. 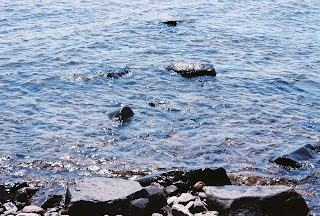 Clear blue waters of Lake Superior at Duluth
It's not just the ambience of Superior.  It's the instantaneous changes of nature.  One moment, the waves are merrily rolling toward the shore; the next minute, a heavy fog muscles its way in, and the waves become angry and gray.

It's life.
The cold spray splashing your face.  The waves that sound just like thunder, as they claim the rocks.
When the lake is calm and the sky is sunny, it can seem just like any other place in the world.  Lovers stroll the paths.  Kids squeal and throw stones into the water.  It could be anywhere.
It's when Lake Superior puts on its BIG SHOW that one feels alive.
The lake changes all the time.  Here are some of my vacation photos to prove it: 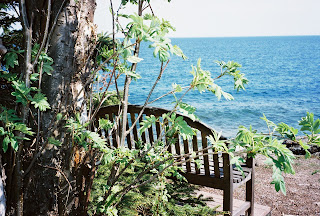 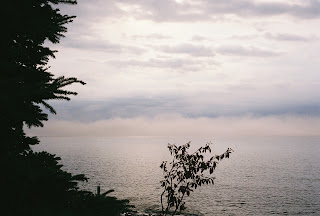 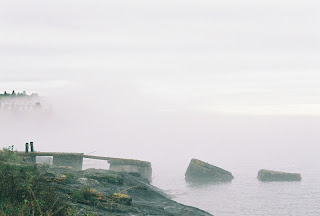 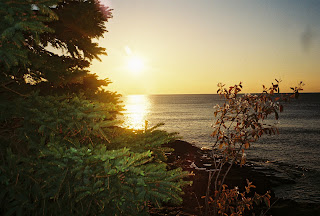 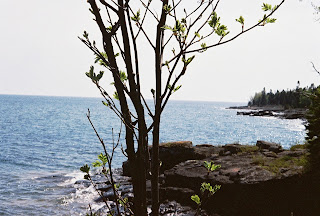 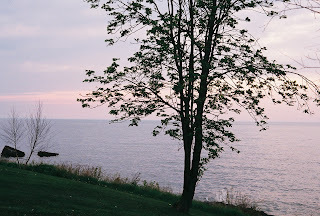 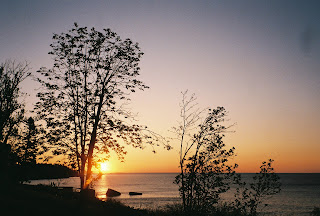 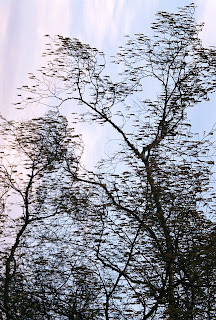 And, this has nothing to do with the lake, per se, but I thought you might want to see our traveling companions. 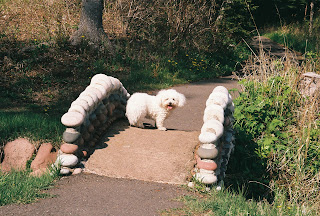 Josie on the "fairy bridge" 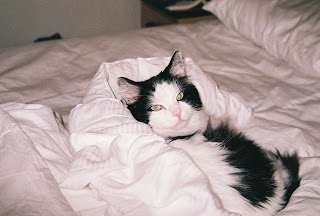 Most people don't take their cats on vacation.  But we take Bob. 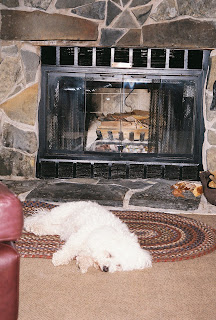 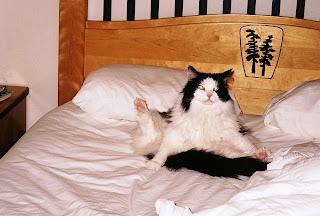 We don't travel many places.  If I could, I would take a European river cruise.  I don't see that happening anytime soon, however.  Because they probably (likely) wouldn't accept Josie and Bob.

But I'm happy with my lake.

And it is mine, by the way.  I have claimed it.