I will readily admit that I liked having my boss 1,594 miles away.

It's not that we ever tried to hide anything, or misrepresented anything that we were doing.  It was just freeing to not have a boss sitting with his spyglass trained on me every waking hour of the day.

Peter was all about incentivizing people.  That was important, in our biz.  Our people didn't get paid a lot, and the work was tedious.  We needed to give them a reason to hang in there (aside from the fun). 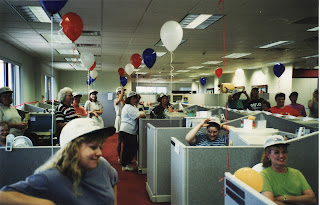 And he, rightly, understood that he also needed to incentivize me.  I was doing a manager's job on a supervisor's pay.  And I was basically turning over my life to my job and to the company.

One of our first telephone conversations involved the logistics of where I was to put all the additional supervisors.  We had two supervisor cubicles; one in the front of the unit, and one in the back.  I had five supervisors!  Two cubicles were fine, if we were only talking about the day shift and the second shift, but things were getting a bit cramped, and sharing cubes was sort of like the Warner Brothers cartoon of the wolf and the sheepdog, Sam and Ralph, punching in and punching out.

Peter said to me, well, what about that empty office back there in the corner?  I said, an office?  I'd never had an office before.  Nobody's using it, he said.  It's dark.  The light's never been turned on.  You should just move in.

And it did not go over well.  I'd had a manager, Linda, before I'd made the transition from Claims.  Linda was Phil's lackey.  She occupied the office next door to him.  The contempt she felt for Phil dripped like tears of leather and acid.  But at least bleached-blonde, perfectly-coiffed Linda had an office!  That was her one consolation, seeing as how she had to play go-fer to Phil. 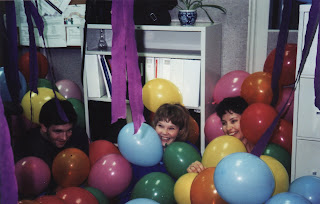 Dennis, Lynnette, and Peg ~ "decorating" my office for my birthday.  Grrr!!

Ooh, Linda was not happy.  And I didn't have to report to Linda anymore, so I waved to her, sweetly, and replied, "Thanks!"  And then Linda fumbled a bit for words, and managed to propel herself forward again, on down the walkway to her own, identical, office....leaving trails of angry smoke in her wake.

Peter was also generous with the Super Saturday budget ("Hat Day", to us in the know).  He'd give us $300.00, and my main supervisor, Laurel, and I would head out and do some serious shopping, and buy enough nice prizes as we could with our allotment. 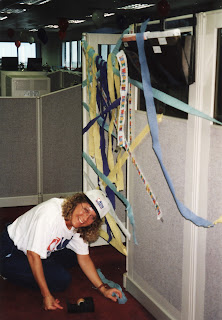 Oh sure, Peter would call once a day.  That was what a good manager should do.  Sometimes he would initiate conference calls, so I would make sure all my supervisors were in attendance, there in my office, and I'd put Peter on speaker phone, and the five of us were free to roll our eyes as much as we needed to, and to silently mouth replies to one another, and to stifle a giggle or two, but overall, we were respectful, because we respected him (at the time).

And our IKFI units kept right on producing.   The year after the "Hee Haw Halloween", I believe I made a promise to the staff that if they exceeded their goal, a famous singing duo would stop by and do a song for them.  They hit it out of the park, naturally.

So, along came Sonny & Cher: 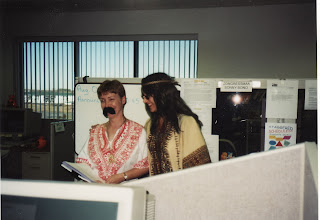 Everyone remarked that I looked so much like Phil, with that mustache.

And we serenaded them with, "I Got You, Babe", although I somehow sounded more like Bob Dylan than Sonny Bono.

Our little department became such a success that it was determined that the company would try to replicate that achievement, in other locales.  A division was started in Allentown, PA, and later, one in Blue Bell, PA ("Blue Bell" ~ doesn't that sound pretty?).  I patiently schooled the new supervisors of those divisions in the workings of the IKFI Department.  I had, after all, authored the training manual, and I had developed the performance standards.

I took endless calls from the dolt, Pat, who was in charge of the Allentown office.  I became concerned that she didn't seem to understand things, since she asked me the same questions over and over, but I exercised patience, and I was blindly confident that she would eventually catch on.  I tutored the Blue Bell guy, as well.  Daily.

As a respite from the constant telephone irritation, the IKFI Department decided that we should hold our first annual (and, as it turned out, one and only) picnic.  We didn't rely on Peter, this time, to furnish us with an operating budget.  We financed it all on our own, and we solicited local businesses to donate door prizes.  Somewhere along the line, it was determined that we would have a Hawaiian theme (I think because the Oriental Trading Company catalog was featuring cheap party favors, including straw beachcomber hats).  We had volleyball, and face painting for the kids, and we offered the opportunity for everyone to have their "official" picture taken next to the surfboard, which had the welcoming logo, "You're Next", printed on it. 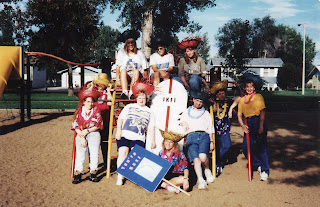 Meanwhile, we were aware that Halloween 1998 was rapidly approaching.  I had become enamored of the movie, "Grease", so I suggested that we do a Grease theme for our contribution to the annual rite of October.

Once again, we outdid ourselves.  One of our people was a good graphic artist, so she created some signage, replicating the Grease logo.  We also designed one of those "test your strength"  hammer games, and we had numerous Grease carnival midway attractions. 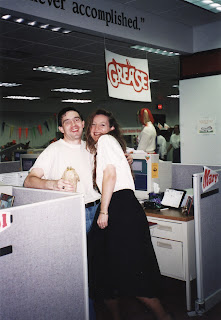 Dennis and Gaby (or "Gabby", as Phil would say.) 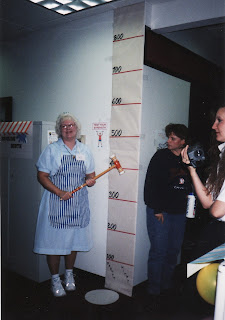 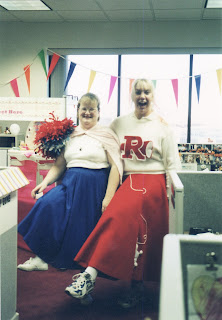 A bunch of us corralled one of our employee's daughters into showing us some moves for the song, "We Go Together", which she had at one time performed with her dance troupe, so she stopped by and tutored us in the proper moves, and we spent a few hours practicing our routine in my....nice, shiny....office.

One of my supervisors, Lynnette, was designated to be "Frenchy", so I bought a can of pink spray-on hair coloring, and proceeded to spray her blonde hair pink.  She looked beautiful when I was done. 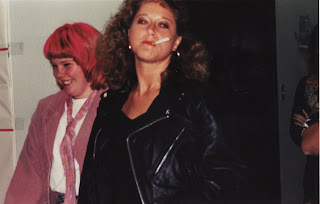 I, as was my wont, was Danny Zuko, and my main supervisor, Laurel, was Sandy.   We, too, had our gangs.  Another brave lady, she, too, with short hair, became my Kinickie, and we also had Jan and Marty, and the whole crew. 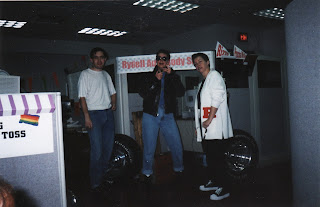 When the judges made their way to our little corner of the world, we switched on a boom box recording of "We Go Together", and proceeded to dazzle them with our tightly-rehearsed moves. 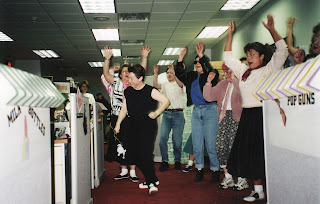 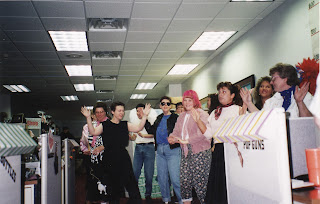 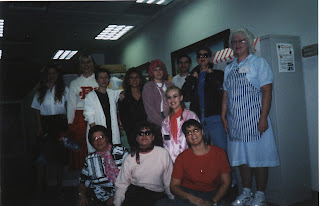 During the instrumental break in the song, we actually grabbed hands with the various judges and performed a jitterbug with them.  Getting the judges involved in the action was....gold!

At the end of the song, everybody in our troupe boogied on down the aisle and were handed their yearbooks at the end of the line, and danced on off, just like in the movie.

People still talk about it to this day.

Once again, we blew everybody away.  Over on the other side of the building, the self-insured employees did a "Titanic" theme.  But all they stupidly did was stand there stupidly in front of their cardboard boats.  Where was the dazzle in that?  They took second place (a "pity" designation, I have no doubt).

And, meanwhile, back in IKFI,  all the people loved us, and hated us.  But we got the trophy, so la dee DAH!

Alas, however, while we were savoring the good times, we had no clue about the bad times to come.

My "Career ~ Chapter One