They Placed a Wreath Upon His Door 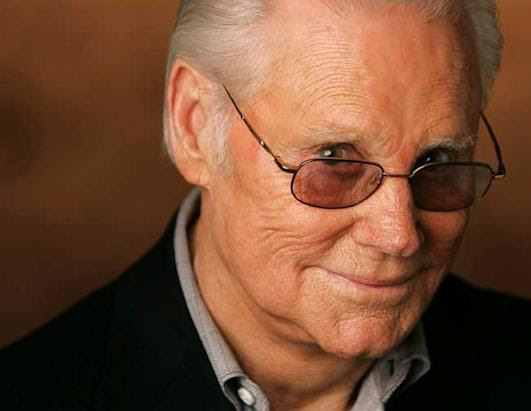 I thought George Jones would always be around.  He was always around ~ for my whole life.

My friend Alice and I, when we were tweens, religiously attended whatever cavalcade of stars was playing at the World War Memorial Building.  And, because we were kids with nothing much to do, we always managed to snag front-row seats, because we showed up a couple hours early and plopped ourselves down in the seats of general-admission honor.  In 1968, the same year we encountered Merle Haggard (in more ways than one), we also saw a package show with a new girl singer named Tammy Wynette and a bunch of other people we'd never heard of, including Tammy's husband, Don Chapel.  We liked Tammy ~ she'd had a few hits by then; Your Good Girl's Gonna Go Bad; Take Me To Your World; I Don't Wanna Play House.  She seemed unnaturally shy for a performer, though.

The star of that show, however, was George Jones.  As the closing act, he took the stage with his Jones Boys band (who'd actually been on stage the whole time, because they were the backup for...everybody), and kicked off hit after hit after hit.  White Lightning, The Race is On, Love Bug (I always preferred George's up-tempo numbers); Walk Through This World With Me, She Thinks I Still Care.  George, with his outdated crew cut, was energetic; having fun.

Midway through his set, George called Tammy back onto the stage.  The two of them sang some duets, and wow!  Tammy loosened up!  Now, she, too, seemed to be having fun.  The two of them locked eyes and sang to one another.  All of us were just bystanders by then.

A few weeks later, we heard a couple of disc jockeys joshing around on the air.

"D'ja hear that Tammy Wynette is divorcing her husband to marry George Jones?"

Yep, George Jones definitely had an influence on Tammy.

It seems that George Jones had an influence on a lot of people.  Alan Jackson, for one, idolized him.  Keith Richards was a big fan.  It's said that Neil Young wanted to stop by backstage and meet George after one of his concerts, but George said no, because he'd never heard of the guy.

George had a lot of nicknames:  Possum, No-Show Jones, The Singer's Singer.

His instrument was like a rubber band stretched taut.  It dipped and it soared, and it dipped back down again.  George could turn one syllable into three or four; just by climbing that stairway and then descending it.  The reason people liked him so much was because the pain in his voice hit everybody in the gut.  It sounded real.

As I said, when I was a kid, I liked George's up-tempo numbers.  Like these:

George Strait covered this one:


George, of course, had ballads, too, in the nineteen sixties.  Like this one:


My favorite from the late sixties came from the album surprisingly titled, "Good Year for the Roses".  Here's a remake; a duet with a silly-looking Alan Jackson:

And, naturally, there were the duets with Tammy:

And one many years later (they sure could make beautiful music together):


George recorded this one with James Taylor.  Sadly, there is no video of the two of them performing the song:


I've always contended that, no matter what anybody said, this next song is more gut-wrenching than, you know, that other one.


I saw George Jones live once again, three decades later.  He was on a bill with Vince Gill and Conway Twiitty.  I'd come to see Vince Gill.  George could still bring it, though; boy.  I didn't go to that show with Alice.  Time had passed and lives had splintered.  I don't know if Alice was in the audience that night.  If she was, she, too, was probably there to see Vince.  Vince was the headliner, and his career was glowing hot.  Alice most likely didn't remember the night in 1968 when we watched a romance blooming from the first row.  Life marches on, relentlessly.

Rest in peace, George Jones.  A whole slew of people are never going to forget you.

My dad loved this song...