Gosh ~ Country Is Not Doing Well 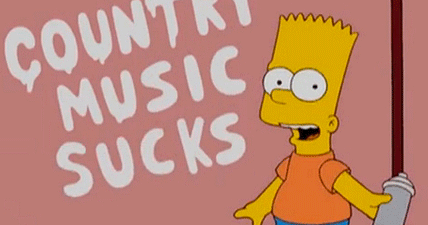 In a new article in something called Country Aircheck, radio programmers are bemoaning the decline of country music in the Arbitron ratings. It seems that all the artists sound the same and the songs are too "poppy".

My question is, who exactly is listening to "country" radio? Who are these freaks? Certainly not music fans. Do these listeners even know what country music sounds like? Do people even like music anymore?

When I gave up on country radio sometime around the year 2000, it was because I'd become disgusted with the amalgamation of country and thin, watery gruel. About the time that Faith Hill and/or her producer decided to countrify a Janis Joplin song, I threw up my hands and stopped. Stopped listening to radio completely. My last sad memories of country radio are some shredded electric guitar by Keith Urban and the last gasp of the Dixie Chicks.

Since then I have no idea who or what is popular in music, country or otherwise. My one country website, which is sadly bro-centric, tries to steer me toward nice new country, but everything I sample is a disappointment. I've almost given up trying. I would kill for a new shiny artist who was country and good. I don't think it's gonna happen. Because no one knows what country is. Granted, I've been around longer than most, but there is such a thing as recorded music. Anyone can listen, anytime.

I'm on the cusp of starting my own music podcast, just because people are idiots. Probably not the best tagline.

I would do mine differently, though. I don't exactly care about artists' backstories. I care about the music.

It's the least I can do.

Before it's too late.