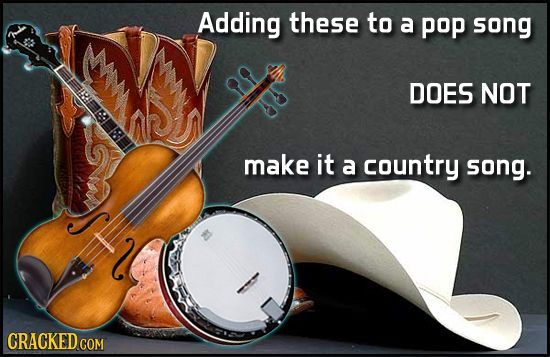 My recent dive into Today's Country Hits was at once enlightening and depressing. Discounting the revelation that the songs are bad (bad!), the singers are utterly forgetful.

Music (and artists) are machine-molded. Some cigar-chomping industrial mogul is getting richer by the day churning out these plastic widgets. "Son, it's not about perpetuity; it's all disposable, boy; and the rubes'll keep coming back for more! Hardy-har-har! (cough)"

Granted, I haven't listened to today's country enough to be able to distinguish one bland artist from another, but even if I did, could I? Two days ago I sampled the current top ten tracks and today I would disgracefully bomb the pop quiz.

I'm a crafter, which means I follow a pattern; but even I switch things up now and then. I like to put my own stamp on my creations. Today's acts, however, seem content following the dots ~ fake southern twang in just the right places, pickup trucks in verse one; one, count 'em, one fiddle riff heavily enveloped by EDM beats.

These guys are not artists; they're products.

I like listening to Willie's Roadhouse on SiriusXM. I'm not completely on board with all the tracks. Some are even before my ancient times; but I certainly know the artists when I hear them; like 'em or loathe 'em. Few of the singers featured on the channel can be confused with someone else. The instant I hear Tanya, Hank, Faron, Webb, Paycheck, Price, Buck, MERLE, even Jack Greene and Bill Anderson, I know who's singing. And each of them had their individual niche. One can't compare a Haggard song to a Ray Price track.  I can even distinguish a Nashville Sound (Atkins) recording from a Bakersfield production (Nelson).

Singers were who they were and each was his own man (or woman).

The lure of country was discovering a new artist who was different or an intriguing sound. Even in the eighties, individualism reigned: Strait, Travis, Yoakam, The Judds, Black. Today's goal seems to be "sound like everybody else". This is not a prescription for legend status. But maybe that's not the goal. "Who wants to be a legend? I want my money now!"

You want a song you can dance to, even in a roadside honky tonk that you ducked inside to get out of the rain?

Good luck, millennial hipsters. Nobody's ever gonna punch your songs up on the juke box.