Ever know someone who's a collector? These are guys (and trust me, they're always guys) who relish the hunt, not the plunder. Of their approximately 978 record albums, they probably play five, tops.

That's how it is with collections. I'm guilty. I've collected thousands of individual tracks and full CD's through the years, but I mostly surf over to SiriusXM to be surprised. I recently retrieved my personal PC after months of working on a loaned company computer (thanks, COVID), and today I decided to remind myself of all the tracks I'd ripped.

After hours of deleting duplicates (one of the joys of retirement is infinite time), I decided to bestow stars upon the songs I like best...today. The dilemma is choosing between three and four stars. "I really like this track, but does it deserve a superior ranking?"

Five stars can be intimidating as well. Do I go with songs that are classic or just honor my gut and choose the ones I love? I went with love.

The interesting outcome of this experiment is the number of really mediocre tracks I ripped. I think I just wanted to own them. In case. In case a nuclear incident transpired and all I was left with (remarkably) was my personal computer. In the ragged aftermath I might have a hankering to hear Barbara Fairchild.

I own hundreds of physical CD's, but if I ever chose to pop one into my disc drive, I would need to be suffering from one-song withdrawals. 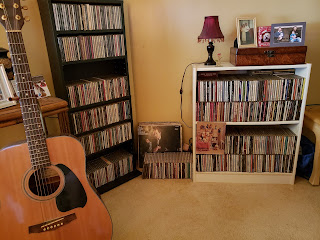 Instead I rely on my uploads.

My Windows Media Player is a really fun app -- it no longer allows me to rip CD's, so if I don't have something on my computer I really really need, I am forced to purchase it from Amazon, even though it's here, sitting on my shelf. Microsoft rocks. Today, in fact, I purchased "Dreaming My Dreams" by Waylon. I have no cognizance of why I never ripped it when my WMP worked, but clearly I did not. However, it was vital that I added it to my collection, because it is a five-star single.

The results of my star ratings? Well, there are approximately three Beatle tracks that merit five stars, although not the ones anyone but me would pick. Elton, too, represents. California Girls shows up as first on the list. Otherwise, I'm stone country.  George Strait has at least three; Gene Watson is a treasure. Then it's an eclectic mix, demonstrating my superior musical taste. Jerry Lee, Gordon Lightfoot, Johnny Bush, Highway 101, Mark Chesnutt, Marty Robbins, Ray Price. Roy Orbison. 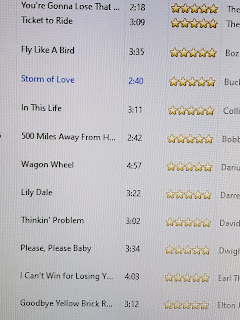 Face it, it doesn't get much better than this: