Reviewing The Top Ten Country Hits From this Week In 1975 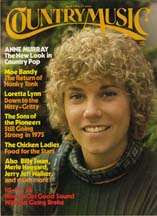 In my quest to review the top country singles from this week in years past, I realize I've neglected the seventies. Part of the problem lies with the limitations of available data. It seems the charts (the only historical charts I've found) only date back to 1975. Thus, as in previous posts, I will be reviewing the top ten singles as if I've never heard them before. As always, there are some I've never heard before or don't remember, so they will truly be new to me.
Given the fact that these singles are forty-seven years old, actual performance videos will be hit or miss.
Let's find out if today's hit are truly the worst ever created, by comparing them to yesterday's.
#10 ~ City Lights ~ Mickey Gilley

It's a bit unfair to throw a classic song into the mix. Obviously I've heard it before -- by a better singer. Staying objective is impossible when one is familiar with the original. I will say that, for Mickey Gilley the arrangement is fitting, highlighting his honky tonk piano. I'm not a fan of the female background singers. Clearly this is a solid song, written by Bill Anderson. It seems, however, that the singer could have given it the reverence it deserves.

Well, the first line is just ick. It immediately colors my impression of the song. That aside, the lyrics are pedestrian and the melody is overly familiar. I predict this track will be quickly forgotten, obscured by actual good songs recorded by Owens. This seems like more of a deep album cut than a single released to radio.

This is one of those instances in which a classic song can be improved upon. Obviously this is a Hank Williams hit, but I prefer this more updated sound. Ronstadt is a superb singer and she stays true to the country vibe. Great performance, nice harmonies from Emmylou, lovely steel guitar. I only deducted a half letter grade because this is a remake.

I like the chorus. Allen Reynolds wrote this song, among many, many other hits. He was also Crystal's producer. The song is solid, the singer's voice still exudes country, without the machinations that will plague her later tracks. Props to the unencumbered arrangement.

While this song is not bad, there's something about it that's hard to get hold of. The verse has an elusive melody. This might simply be the way Williams chose to sing it or the simple acoustic arrangement. A drum beat might have helped. I would like the track more if it wasn't so frustrating. That's the drawback of acoustic songs. They allow for a bit too much introspection -- nice for the singer; annoying to the listener.

Well. This is destined to be a Jennings classic. He has redefined country to his liking. Ralph Mooney is playing those classic Wynn Stewart steel licks, and the zydeco accordion is a nice touch. Waylon is one of the few artists of any genre who has a presence. He can't be ignored. Solid, classic track, written by the man himself.

What's worse than a recitation? A half recitation. Granted, this is a children's song, which leads me to wonder how it made the country charts, which are not normally determined by children. I forced myself to listen to the entire track, since those are the rules I've imposed. It was, however, nerve-grating. Now I'm a mom, so I know that if I'd ever played this for my kids, they would have retched into the toilet, then wandered away to pursue more mature interests. There's nothing worse than pandering to kids.

Does this have the exact same melody as Country Bumpkin? I guess Cal is very attached to this particular chord progression. I like the singer, but Country Bumpkin has, at least, a more compelling story. This is, honestly, a country song any novice songwriter could pen. Cal can do better.

There's something about T.G. Sheppard that's kind of insidious. Songs I really shouldn't like (because they're not great songs) I find myself liking. I give the artist credit for mostly choosing compelling songs to record. No, I wouldn't purchase this single, but it's not something I would turn off if it streamed out of my car's speakers. What is the mark of a good song? My theory (as a failed songwriter) is -- a memorable chorus. Other sins can be forgiven. Sheppard doesn't have the country cred that Waylon has, but he's actually pretty good.

When one records scores of songs, it's inevitable that they all won't be winners. It's not that this song is bad; it's simply forgettable. I've certainly forgotten it. I just played it and it's already erased from my memory. The late great Dallas Frazier and A.L. "Doodle" Owens co-wrote it, but again, they all can't be winners. I would like to give this a better rating, because I don't want to be harsh, but I can't in good conscience elevate it. Thus ~

It's impossible to recognize a classic song in real time. This particular chart wasn't the most brutal, but it was close. However, we found a Waylon track that will be with us forever.

Maybe that's all we can wish for.