Reviewing The Top Ten Hits From This Week In 1992 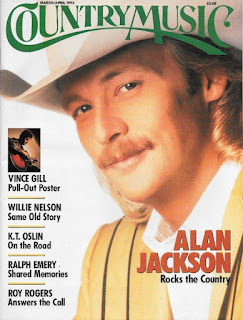 I've done a couple of reviews of the top ten (modern) country singles from a particular week, in which I listened to songs I'd never before heard and reviewed them on the spot. It was eye-opening, to say the least. But is today's country so much worse than the country of thirty years ago? Let's find out, shall we?

To be fair, there are a couple of chart-toppers of which I have no recollection, so providing I can find them on YouTube, these will truly be "fresh" reviews. As for the others, I'm going to listen to them as if they are truly new, and offer on-the-spot commentary.

(no official music video to be found)

First of all, I really like this guy's voice. However, the song starts out too slowly and the first verse is whiny. The chorus does improve the overall tone, but it goes by so fast it's almost an afterthought. The track is short -- just three minutes and six seconds -- which in this case is actually a plus. I would not buy this, but I do believe that with better songs, this Chesnutt guy can definitely have a bright career.

I'm immediately drawn to this track, and the multi-part harmony seals the deal. The lead singer's (Larry Stewart, is it?) voice is so warm, the recording could succeed even without the harmony (but I'm glad they kept it.) This single is actually shorter (at two minutes and thirty-eight seconds) than the number ten song, but so much meatier. The piano interlude is also a nice touch. I would definitely purchase this. I wouldn't like all the group's singles to be up-tempo; their harmonies would really shine on ballads, but this is a welcome diversion.

The Tritt guy definitely dominates this track with his southern country soul, but Stuart complements Tritt's lead nicely. There's no mistaking that this is a real country song. The lead guitar, which I understand is provided by Stuart, along with the steel guitar riffs leaves no doubt that these two artists are seeped in country music. I like the beat (you can dance to it -- okay, not funny). In all seriousness, a modern country track needs some energy, and this song has it. The second chorus will definitely get couples out on the dance floor. I think this single will stand the test of time. Would I buy it? You bet.

The lead singer, who I'm told is Mark Miller, doesn't have a classic country voice, but it works here. This track has a bluegrass vibe (is that Earl Scruggs?), though it's not a bluegrass song. I like the message the song conveys; it's rather universal. The recording could have easily been mediocre, but the deft production really amps it up. And it's a nice singalong. I would buy this as a single, but I would have to hear more from this group before I laid down money for an album.

I guess this is what they call pop country. This song is a "little nothing"; inoffensive but completely forgettable. I do think the singer is great, though. I would imagine he's capable of doing so much more. I wouldn't buy it, because it's really a cliche, and says nothing.

This is a nice little song, but it doesn't pick up steam until the chorus. It's almost as if the first half is a completely different song from the second. It surely requires the listener's patience. While the singer is fantastic, she needs to pick better songs ~ perhaps fewer ballads and more "in your face" rockers. I would not buy this single, but it's a pleasant listen on a rainy day.

(the only official music video I could find was broken up in two parts, for some reason)

I'm not a fan of the singer's voice. I'm thinking he was a third-string signee, and thus didn't get his pick of the best songs. The song will be dated in no time due to the pop culture references, which are always a faux pas, unless one is referencing Haggard or Cash. Not only wouldn't I buy it, I find it annoying every time it assaults me through my radio speakers. This is the type of country music that a country fan disavows.

#3 ~ A Jukebox With A Country Song ~ Doug Stone

Watching this video, I find myself impatient to get to the meat of the song. This is a clear knockoff of Diamond Rio's Bubba Hyde, which truthfully is a much better track. If the singer can't find better, more memorable songs, I think his career will be short lived. This is one of those "blink or you'll miss it" tracks, which I predict will have no shelf life. I would not buy it.

I admit I do like the singer's voice, but this song is too treacly. Admittedly, I have a natural bias against songs that try to play on my heartstrings. Anything with "Grandma" or "Mama" are automatic turnoffs. This is probably a pleasant song to hear on the car radio while taking a long road trip, but I would never waste my dollars on it. If you've heard it once, that pretty much suffices. That said, I predict that if the singer finds one song ~ just that one song ~ he'll be immortalized in the annals of country music. All it takes is one.

Well, here you go. I think this just might be the perfect country song. I have absolutely nothing negative to say about this. The singer, the song (especially the song), the production ~ all sublime. I understand Lawrence wrote it, and it is a masterpiece. Would I buy it? I'd buy it four times and play it over and over in a loop. In thirty years I'll still be playing this and waxing poetic about it.